Leadership Lessons I Learned from My 10 Year Old Daughter

It was a hot and sunny Spanish afternoon in Andalucía, Spain. At 1:13 p.m., the red-hot sun was directly above us, beating down on the southern coast, and I was taking it all in. Music was blasting and café con leche was coursing through my veins; I was in my happy place! Hailey and I were cruising along the Costa del Sol’s A-7 highway in our rental car. This highway, its energy, its landscape, and its views are some of the most beautiful in the world.

As we twisted and turned through the hillside, we would catch glimpses of the Mediterranean Sea through the separations in the mountains. I would call back to Hailey to, “check it out”, but quickly realized I would be enjoying it all by myself. Hailey was passed out in the back seat and had no plans of waking up anytime soon.

Hailey and I just spent the previous evening at our great friends, Jose and Lorena’s, house. José and Lorena live in Rincón de la Victoria, a coastal town and suburb to the large city of Málaga. We first met José and Lorena in 2016, while our family was living in Spain for the summer, struck up an immediate friendship, and have become very close over the years. José and Lorena’s daughter, Henar, has also become good friends with Hailey. 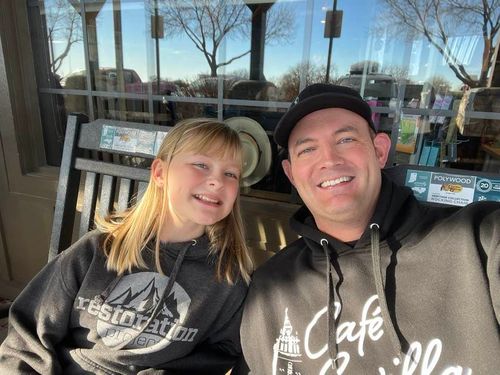 After enjoying a relaxing day with our amazing friends, having drinks overlooking the Mediterranean, taking in the hot sun at the pool, and relaxing over a café con leche and other drinks on the terrace, we finished with a delicious Spanish dinner on their terrace.  I was exhausted from our previous week in Spain, and the huge amount of driving I was doing, so after dinner I decided to hit the bed early.  José and Lorena concurred, and we parted ways to go to sleep around 11:00 p.m. (This is early by Spanish standards.) The remaining two people in the house, Hailey and Henar, decided to stay up later.

Not only did they stay up later, but they stayed up all night.  José, Lorena, and I enjoyed our breakfast consisting of tostada con tomate, café con leche, and a little bit of jamón serrano. The plans this particular morning were for Hailey and I to hop in the car and take a 5 hour drive along the Costa del Sol, then head up the Costa Blanca, where we would end our final days of our daddy-daughter vacation on the Alicante coast enjoying Playa San Juan.

Hailey and I waved goodbye to our friends around noon, and finally began our journey to Alicante.  As I was sharing the plans with Hailey, she interrupted me to confess that she and Henar had lied to me.  She admitted that they stayed up until they heard me wake up, which was around 8:00 a.m.  She also declared with urgency that she needed me to pull the car over so she could throw up.  As she shared this with me, an exit appeared around the bend. I ripped the car off the exit ramp and slammed on the brakes on the side of the road, right as Hailey began to fill a paper bag, and some of our rental car, with the contents of her stomach. Come to find out that not only did these girls stay up all night, but they decided to feast on sweets, chocolates, and candy till the early morning hours!

Once Hailey and I cleaned up the mess in the car, the bag, her hair, her clothes, and our nearby luggage, we jumped back on the A-7.  It was 12:30 by this time.  43 minutes later would bring us back to the opening of this story.

Hailey was passed out in the back seat getting some much-needed rest, and I was taking in the sights and scenery of Spain.  Our car was cruising along the windy highway around 120 km per hour (72 MPH), and the large bend in the road, that pulled the highway north and into the Spanish hillside, was visible on the horizon. As we began to turn north and climb in elevation, the cars in front of us slammed on their brakes.  I saw this happen with plenty of time to slow down, and we decelerated from 120 km/hr to 20km/h (12MPH).

There were roughly 30 cars in front of us, and a visible roadblock that has slowed traffic.  We could not tell what the roadblock was until we arrived.

As soon as the two cars in front of us cleared this roadblock, I saw something I will never forget.  A man laid out, his ankle snapped in half, covered in blood and lacerations, his clothes torn, his shoes on the highway where they landed after he had been ejected from them when stuck by a car traveling around 60 miles per hour.  I found out later that this man jumped in front of that car in an apparent attempt to end his life.

We have a saying in our family: “The Shoups Stop to Help”; and that’s what we did. I pulled the car to safely on the side of the highway, yelling at Hailey to wake up.  She did not wake up.  I ensured she was safe in the car, then exited to assess the scene.  Upon arrival to the scene, I noticed a man in his 50’s standing over the man who was struck by the car.  He was on his cell phone and smoking a cigarette.  There was a small crowd of onlookers gathered, maybe 4-5 people standing and staring in disbelief.   The common denominator to the chaos was that everybody was observing, nobody was helping.

I will never forget the sounds this man made as I approached the scene.  He was screaming in pain and agony. His bare skin was frying like an egg on the hot, black pavement. He was disoriented, and his ankle was very visibly snapped in half.  Blood covered the street.  In Spanish, I informed the injured man who I was, that I was certified in first-aid and CPR, and asked if I could help.  He responded by screaming to me in a combination of Russian and Spanish, asking where his dog was. “MY DOG! MY DOG,” he screamed.

As he puffed away on his cigarette, cell phone man informed me that he “was a doctor”.  I replied to him, “Do you plan to help this man, doctor?” He smirked at me condescendingly and informed me that he had called “emergencias” and help was on the way.  However, immediate action needed to be taken, and I was able to figure out that the injured man spoke Russian as his first language but understood enough Spanish and English to give me consent to help.  Right as I began to render aid, the ambulance pulled up to take over.  The paramedics arrived and asked what happened.  Dr. Cigarette was more interested in his cigarette, and evaluating me, and said nothing.  I caught the paramedics up to speed on what happened.  As they attempted to communicate with the man in Spanish, the combination of stress and pain was making the three languages he spoke jumble into nonsense.

A few minutes later, the Guardia Civil pulled up to clear the scene and direct traffic.  They immediately sent anybody who was observing and not helping away, including Dr. Cigarette.  I immediately became very valuable to the situation as I speak both English and Spanish fluently, as well know Brazilian jiu jitsu.

Why do I mention Brazilian jiu jitsu?  As the paramedics attempted to render aid to the man, he began to yell loudly, fight, resist, and struggle.  He was scared, in shock, disoriented, baking on the pavement, and he needed to be physically controlled in a way that would not cause further harm to him and keep those around him from getting hurt.  What was the main reason this man began to fight the paramedics? He had no idea where his dog was.

Apparently when he jumped in front of the vehicle on the highway, he did so with his dog.  When the man was struck, the dog ran away to hide.  As I began to assist in physically controlling the man, who was becoming more and more combative, I realized it was because he was fearful of being taken away from the scene without his dog.

I turned around to see his dog, scared and hiding under some bushes in the shade, just on the other side of the highway barricade. I realized I could not continue to help restrain the man and get his dog.

I ran as fast as I could to the car, woke Hailey up, and told her that a dog needed help.  She sprang into action, grabbing an umbrella and a bottle of water.  I could tell she was scared.  She was scared of what she saw and what she heard. She was scared of the blood, the chaos, the red-hot highway.  However, I asked her to focus her attention on the man’s dog, and she did just that.  She shaded the small dog with her pink Spanish umbrella, knelt beside him, gave him water, comforted him, and ensured him he would be okay.

As she did this, I re-approached the still combative man to assure him his dog was okay.  I asked him to look behind him.  He immediately saw Hailey, her umbrella, and water bottle with his dog.  I gave him a thumbs up, and he immediately relaxed, stopped fighting, and began complying with the paramedics.

They loaded the man into the ambulance, and the Guardia Civil promised to take the man’s dog to the hospital to reunite him with the man.

The experiences of this hot summer day have forever been ingrained on my mind.  I will never forget the scene that we witnessed and relive it vividly to this day.

Hailey was a hero that day.  A 10-year-old girl, exhausted, sick, in a foreign country, surrounded by foreign language, foreign scenery, and a situation foreign to her, stepped up in bravery. She focused on her love for dogs and passion to help others, while deciding to act, focusing her attention on what mattered at that moment for the situation at hand. Hailey is one of only two people to receive the Northern Colorado Jiu Jitsu Heart Award for her act of bravery that day.

As I write this and take time to reflect on Hailey’s action, bravery, and willingness to help, what I am struck by are the leadership lessons I learned, not only from this event, but also from her.

Here are the lessons, my then 10-year-old daughter, Hailey Shoup, taught me about leadership.

The final and biggest lesson I learned was this:

As the type A, high performing, “I’ve got this handled” type of person that I am, I did not have the situation 100% handled that day.  It was not until Hailey intervened that the situation became calm.  True leaders lead, not by taking all the responsibility of leadership on their shoulders, but by recognizing the capabilities of others around them, and then giving them the space, place and grace to lead.